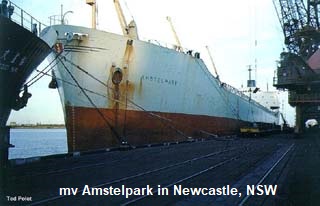 1 - I join the mv Amstelpark

Shortly after Christmas 1975 I was sent to relieve the third mate of the mv Amstelpark, which at that time was in the port of Gdansk in Poland. They had warned me about sailing in a bulkcarrier, so I prepared for a long, boring journey without much chance of seeing anything interesting. In the bottom of my suitcase I packed a hobby box (I still build model trains as a hobby today, 45 years on), which turned out to be a great idea, because boredom almost drove us to our wits' end.

I was booked from Schiphol through Warsaw to Gdansk on the Polish airline LOT, which together with KLM ran the daily service to Warsaw, and my first ever air travel was going to be in a twin-engine Tupolev Tu-134 jet. I still believe that my first flight might have been my last: when the engines were started the lights in the plane suddenly went out. This was repeated fruitlessly a few times, until a crew member came running back and started beating on an equipment box in the tail section of the plane, which apparently contained part of the electrical installation. Slightly alarmed I glanced at my fellow travellers (our first mate and a few Company men seated in front of us who were going to another ship), and they gazed back wide-eyed. 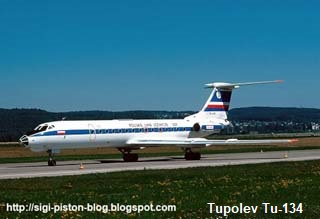 Ten minutes later we were asked to return to the pier, because after due consideration, the plane would not leave today. We waited at the airport for two hours and were booked on the KLM flight leaving the next day. From Warsaw we continued to Gdansk in an Ilyushin-18 propeller machine, an old rattle trap that shook and creaked at every air pocket it hit (of which at 10,000ft there were many). Later I learned of the unpleasant habit of the IL-18 of landing vertically into the ground. I cannot tell you how much I long for the days of communist aviation ...

Upon arrival on board the mv Amstelpark, on New Year's Eve, 1975, we heard that we'd be leaving in ballast for Baltimore, USA, to take a load of 'prefab' flat pack housing kits on board for an oil company in the Persian Gulf. We left Poland early in January after dislodging the frozen warps from the deck. The next two weeks we were hit by every storm that the winter ocean could fling at us. For some reason, the Captain wanted to follow the slightly shorter Great Circle Route north of Scotland, which regrettably means you will encounter more bad weather and therefore have a longer crossing. West of the Isle of Rockall, just beyond Scotland, we made about 60 miles a day for two days ... sideways! 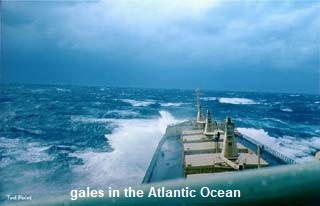 We became stupid with the incessant movement - I slept with two life jackets under my mattress to prevent me from being thrown out of my bunk, and one night a nasty lurch threw a bottle of shower foam into my face, which had been resting on top of a cupboard on the other side of the cabin. Nevertheless, it actually was fun to endure the rough crossing with a young crew, some of whom had their wives on board. We spent the time repeatedly watching the three films in the film box we had on board. One of us had to hold down the projector to prevent it from toppling off the table, although I sometimes wondered whether he was holding the projector or the projector was holding him! Our most popular film was 'Scrooge', based on 'A Christmas Carol' by Charles Dickens, the highlight being the scene in Hell where Scrooge meets his deceased partner Marley. For days afterwards, we startled our fellow crew members by suddenly hollering 'Scroo-oo-ooge!' in their ear ...