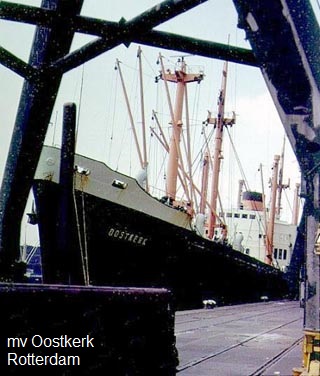 My first voyage, as an apprentice officer in July 1973 in the mv Oostkerk, was bound for the Persian Gulf, which at the time hadn't yet been devastated by a bloody revolution and three wars in succession. We departed from Rotterdam, sailing to Hamburg and London before setting off to South Africa. The Suez Canal had been closed due to war damage since 1968, so we had to circumnavigate all of Africa.

The first day on board in Rotterdam I was required down in the empty no. 4 lower hold. Overalls white as milady's fingers, clean working gloves, you know what I mean. With some trepidation I look down into the gaping 40ft deep void, where welded steel ladders reach down past the upper and lower 'tweendecks into the open lower hold, all hatches having been taken out. In some places the rungs, which have been welded to the uprights, have come loose on one side. 'All right,' I think to myself, 'let's do it.' I swing one leg over the coaming, feeling for the uppermost rung. Here comes the boatswain swaggering along the deck, grinning truculently: 'Have you forgotten your parachute, Mr Mate?' I swallow, and doggedly carry on. I still remember going up and down those ladders in a very concentrated manner, looking in front of myself and certainly NOT down...

A coastal trip, back in pre-container days, was a busy period, putting into a series of ports for loading and discharging, often doing both at the same time. We used to spend several days in each port - effectively a general cargo ship was a floating warehouse filled with crates, bales and bags which had to be manhandled in and out of the stowage space into the hatch square where they could be reached by a crane or a derrick runner. The first improvement was the use of pallets, which could be worked by a forklift truck, even on board. I have driven these things myself which was great fun. In the 1950s (I think) the first 8x8ft containers appeared, eventually displaced by standard 20 and 40ft containers which we know today. 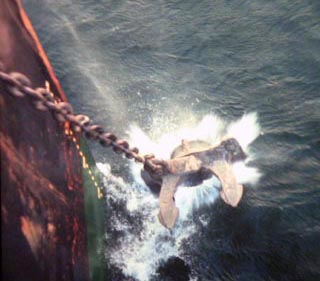 One day out on the coastal trip of the mv. Oostkerk in 1973, we first had to spend the weekend at anchor off the mouth of the River Elbe near Helgoland. Waiting at anchor, especially during a weekend, isn't unusual. Quay space is limited and expensive during a non-working weekend, even though better planning methods have reduced this practice to some extent nowadays. The anchor watch was the apprentice's job - guarding the ship's position in case the anchor slipped due to tidal streams or wind. The advantage is that a 'green' sailor learns to use the repeater compasses on the bridge wing, study the charts and fill in the watch journal. Before obtaining our official papers we weren't allowed to touch the ship's official log, that was the First Mate's domain.