In Dutch there is a saying that blood will creep where it cannot flow, meaning that old passions will not easily die. In the early 1980s, shortly after the end of my seafaring career, I bought a beautifully varnished 18-foot plywood daysailer, which I equipped for coastal cruising.

A few years later I sailed this tiny matchbox to England together with my girlfriend. Madness of course, but it was far less risky than you'd expect. For one thing, I knew the sea better than many amateur sailors, and I have a healthy respect for the sea.

Anyone who has been in a Force 10 with forty-five foot seas in a freighter in the Southern Ocean will agree. Conditions during the sailing season in the North Sea or the Channel never are this extreme, but even so as an amateur sailor I have turned back several times if the going got too rough during a passage. Even a seaworthy yacht is but a tiny thing in 6 foot seas which a bigger vessel will laugh at.

When our kids arrived, we needed a slightly bigger boat. How often they hated me for being seasick I cannot recall, but I also remember a time when we were sailing in bad weather in an estuary, double-reefed and flat on our ear, with the boys dancing to the pitching of the boat down below in the cabin and the music turned up. It was like a floating disco party. 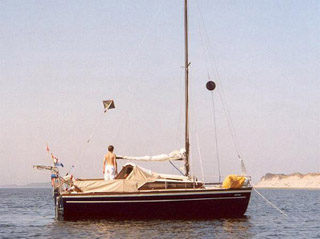 Young children grow up and after a decade the sailing holidays slowly came to an end. But meanwhile we have graduated to a 32 foot boat, which is big enough to get us everywhere we want to go. By now we sailed to England, the German north coast and to France.

We're now over 60 and still afloat. 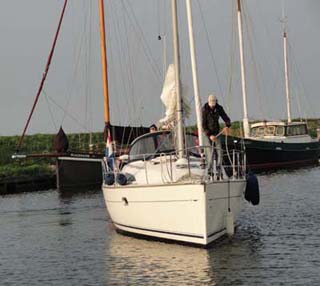