I was born at the end of the baby boom and grew up in the austerity years of the 1950s, followed by the wild 1960s as a teenager in Amsterdam. The city at the time was in revolutionary turmoil, which they copied from the Paris revolt. Young people threw off the yoke of convention, smoked pot and fought with the police. I saw it happen at close quarters - in 1968 some classmates in what was a very good school even saw fit to show themselves with Mao's little red book. Luckily, despite all the havoc I was taught very well by excellent teachers.

At school I was a kind of sponge absorbing knowledge - that school was very good at training knowledge-hungry youngsters. We were taught to look over the boundaries of individual disciplines - in the lunch breaks we were given master classes outside the exam curriculum, which were aimed at broadening our horizon. These classes were always well attended.

After obtaining my ‘A’ levels I went to study chemistry, which was a main interest of mine in school. Regrettably the chemistry program at Delft university started with loads of calculus, physics and other tough stuff before even touching the fringes of chemistry. Very soon it transpired I didn't belong there.

One of my parents' neighbours was a tanker captain, who suggested that I'd go to sea. I followed his advice and changed to the Nautical College at Rotterdam in 1972, training for my Mate's ticket. It was rather a culture shock, an all-male environment that needed a different mindset. It was a tough school, but after a while I felt like a fish in water at the intriguing mix of knowledge which I was offered.

In 1973 I went to sea for a year, following which I returned to college to complete the course, obtain my certificates and go to sea as a Third Mate. Not every ship I sailed in was a happy one, but in general my recollections of that period are good. 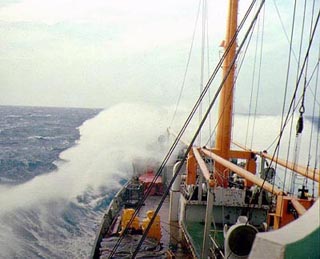 Regrettably my seafaring career was cut short very soon. After a few years my health began to trouble me and in 1978 I was admitted to a hospital, needing serious surgery. My doctor then advised me to give up the sea for my own good. I wasn't yet 27 and again stood empty-handed.

Following convalescence I found a new job as an operator at a computer centre, starting a new career in ICT, eventually ending up doing organisation modelling and quality management. I had a knack for that, and often it wasn't too bad, but repeatedly seeing your work being sidelined by policy changes wasn't very motivating.

Working in a big organisation that continually reorganised eventually felt like the Sisyphus curse from Greek mythology, repeatedly having to lift a heavy rock up a slope and seeing it roll down again just after you think you're there.

Never again I was to experience the same job satisfaction I had at sea. At the umpteenth reorganisation, about twenty in as many years, I was made redundant and opted for early retirement, as I was 60 by then. The relief of not having to repeat the same aimless chores every day was immense.

Even so, being retired didn't sit well on me. After a while I turned to writing fiction.